BPO Companies: how to deal with calamities?

On average, the Philippines is hit by over 20 heavy to severe typhoons every year. The most recent disaster – Typhoon Haiyan (locally known as “Yolanda”) and the recent storm Rammasun affected some parts of the BPO industry, but according to industry observers, the level of impact has been kept to a minimum because of a companies’ forward-thinking disaster recovery procedures.

It has already been established in the last decade that the Philippines has become a source of a high-grade good-quality, English-speaking virtual talent. Many foreign companies including those in business process outsourcing have put roots in the Philippines, and it is expected that they have to take into consideration the climate changes in the country when they lay down their operations. According to the BPO Association of the Philippines (BPAP), the industry is sufficiently organized in terms of disaster recovery. Companies have released statements saying that the impact from typhoons are generally immaterial to them because they have had the foresight to put together and implement recovery planning and built-in redundant support infrastructure.Outside Metro Manila including Makati, some cities have to suspend work in preparation for typhoons. There are temporary power outages and disruption to telecommunications. In cities closer to the capital, however, many BPO organizations have the means to immediately shift operations and call flows to other centers in the country in preparation of the storm.Different companies implement different measures to adjust to calamities, including taking into consideration the situation of their employees.

According to Emily Brocoy, the Senior Business Development Manager of Taking You Forward (TYP) Inc., a Cebu-based BPO, “Every time there is a forecast of a strong typhoon to hit the country, we always prioritize the safety and welfare of our employees. On this occasion given the severity of the warnings, we suspended our operations for one day, as we did not want our staff moving about getting to and from work.”

In a report written by Martin Conboy of the Sauce, Brocoy is further quoted as saying that they do not just stop working because it would disadvantage their customers. To prevent this, they established a partnership is a different geographical location that they can seamlessly divert telephony traffic to. This, she explained helps in terms of business continuity planning and allowing for outages beyond their control.As has been the case for a decade, economic observers say that the BPO industry will continue to play an important role in the economy. Given this, it also has a vital role in helping rebuild the country’s infrastructure, and help Filipinos. Because of this, the industry would do well to implement a DRRM (disaster risk reduction management) program. 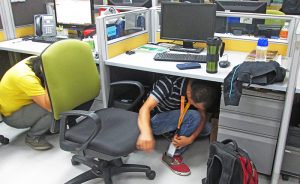 Currently, there is no law requiring business establishment to have a DDRM program. According to operation chief of the Cebu City Disaster Risk Reduction and Management Council (DDRMC) Alvin Santillana, however, a law that will provide incentives for businesses to have DDRM programs should be enacted. He explained in a report in the Cebu Daily News written by Eileen Mangubat that disaster risk and response programs need both the government and people, through active citizens, organizations and business to be effective. After all, the survival of a business enterprise depends on its preparedness. The Philippines is the third ““most disaster-prone” country in the world in a 2013 global study, there are natural disasters (earthquake, typhoons) and man-made ones.In the case of earthquakes, BPOs in the country did not sustain damage to their infrastructure, but they certainly had to take action to address the anxiety levels and fears of the employees. Some companies arranged for family members to come for their relatives working in the BPOs in cities affected by earthquakes.Nino Valmonte the director or product marketing of IP Converge in a presentation in 2013 as reported by Mangubat said that most of the time, companies in the Philippines prepare ourselves for physical disasters, but there is also a need to prepare for “internal disasters”.

These greatly affect businesses particularly SMEs through hardware failure and other causes of data loss. Internal disasters affect as many as 63% of SMEs. Valmonte was quoted in Mangubat’s article that 90% of businesses that lose data are out of business after two years and only 50% are able to get back on track. Ironically, as many as 25% of companies don’t back up their data and only 13% do an informal back-up, where only employees take the initiative.There are now recommendations emanating from industry players themselves that company managements should champion the cause of DRRM when it comes to their operations. For instance, it was reported that the Philippine Long Distance Telecommunications (PLDT) has detailed plans that come into play during bad weather and disasters. The least of these measures include the establishment of which routes and cars will be taken to reach a command center. Drills are also practiced every year. It was also recommended that DRRM briefing must also be part of orientation of new hires.Thankfully, it’s already been noted that BPO companies in the country  have a “sense of urgency” when it comes to ensuring connectivity even during extraordinary circumstances.

-Form a team with a project manager. A leader is necessary to constantly update and look into the program.

-Identify the critical processes that can be affected. Have preventive actions, identify methods of communication and reporting in the hierarchy

-Establish staff safety measures and identify a contingency location where staff can meet in case of an emergency. It’s also important to have offsite data storage and system availability. Lastly, continually test and review the plan.

In the meantime, in the case of companies that do not have a strategy yet, they need to have an Aftermath Action Plan for Disasters.

-Make sure that near term/near shore or alternative suppliers are within easy reach in case a calamity has longer effects.

-Determine and evaluate the possible impact of the calamity on key operations of the business and prepare for them.